In Hamar and Bana tribes when the boy is ready to become a “man” (Maza) and go on to have cattle, get married and have children he is given a miniature club known as Boko by the family elders and his head is partially shaved. Boko is his permission to start inviting other family and friends to his Bull Jumping ceremony. The ceremony is his gateway to enter manhood and become a Maza. On this important day known as “bara” the men start to build shelter for the guests to sit under and women grind maize to ferment and make alcohol. 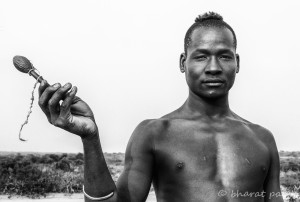 A “novice” with the Boko. Knots on the piece of grass represent the days left to his ceremony.

On a set day (Gati) the ceremony starts as a group of Mazas (those who have already jumped over bulls) arrive at the site carrying long thin switches and for whom the boy’s family, friends and guests, especially the women folk, have been waiting for. As per tradition these women are prepared to be whipped as a show of their affection and devotion for the boy who is about to become a man. Young girls as well as women run up the Mazas in frenzy to be the first to be whipped on their backs. 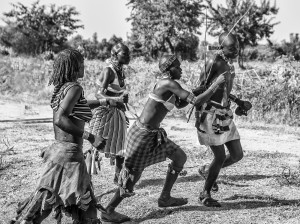 Hamar Girl asking to be whipped 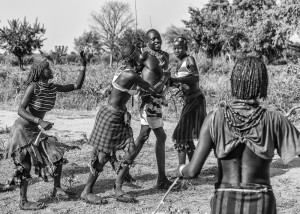 Maza pursued by girls asking to be whipped 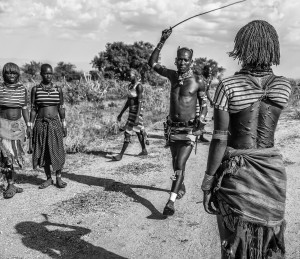 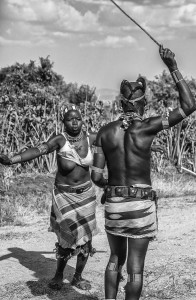 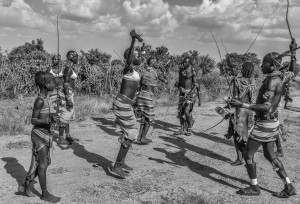 Girls being whipped by Mazas. They will refrain from showing any signs of pain. 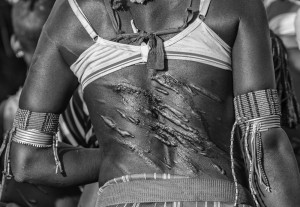 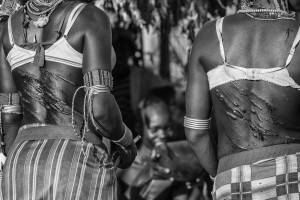 Backs of many of most women already have severe welt marks from previous ceremonies. Welt marks are considered sign of love and devotion. More welt mark a girl has the more it translates into her devotion to her brother and also help in attracting a potential husband. Most women wear bras during the whipping so that the breast would be protected from whip marks. 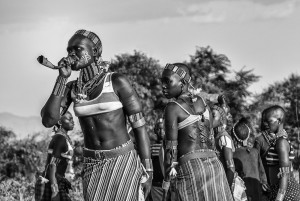 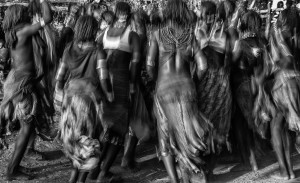 Dancing in close groups and chanting 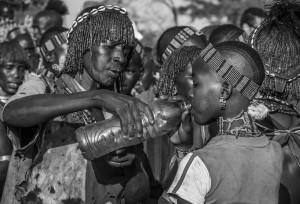 Towards the end of the day the Mazas and other elders gather 10 to 15 bulls, get them next to each other side by side and hold them by the horns on one end and the tails the other. When ready, the novice (Ukuli) will run over the backs of the bulls naked as many times as he can but he must run a minimum of 4 times to become a Maza. He needs to do that without falling off lest he should be ridiculed for the rest of his life by family and friends. Feat is not easy as any miss-step can cause injury especially if falling on bulls’ horns. At the end of his jump his hair is shaved off as he joins the other Mazas. 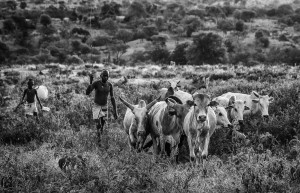 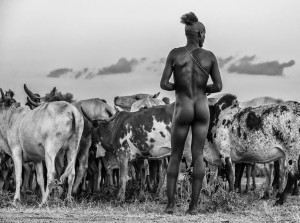 Novice preparing for his moment to become a Maza 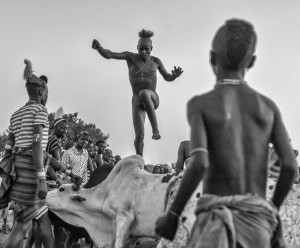 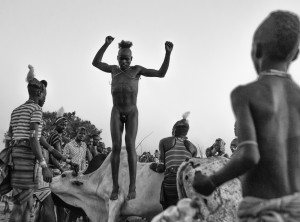 After the ceremony and for the next 3 days, period known as “Gati”, the family and friends rejoice dancing, eating meat and drinking “farsi”. At the end of third day guests disperse back to their own homes.

On becoming a Maza he would join a band of other Mazas who live on their own until they find a woman to marry. Meanwhile surviving only on milk, cattle blood, honey, meat and drinking traditional coffee (made from coffee husks). They are not permitted to eat anything else during this period.  Mazas perform an important role at all Bull jumping ceremonies. This is also where they may find potential partners.

This entry was posted in Tribes.